It was the biggest and best motorcycle show in Ottawa ever. A weekend of fun with something for every motorcycle enthusiast who came through the doors. Every detail came together, the level of enthusiasm from everyone was highly contagious, and we can’t wait to do it all again next year! 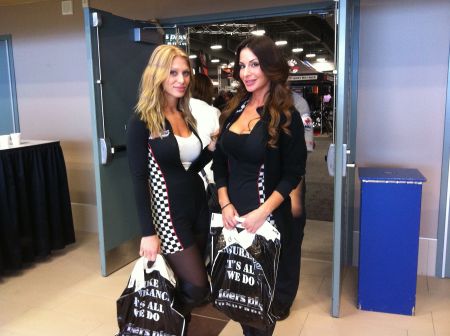 January in Ottawa is usually a cold, snowy month. So when the weather forecast for the weekend of January 11-13, 2013 promised temperatures in the low teens, everyone involved in the Riders Plus Insurance Ottawa International Motorcycle Show was (nervously) ecstatic. The forecast, to our delight, came true, and the crowds of eager motorcycle fans came through. And thanks to the careful and inspired planning of the organizers and the enthusiastic participation of the vendors, the experience was unforgettably fantastic.
The local rock radio station The Bear 106.9 provided onsite live coverage all weekend long. Theirs was the booth with the greatest play element of them all; they marshalled the adventurous through the use of little scooter vehicles that old and young alike piloted with varying levels of success through little races that fed the energy everyone felt. And they played excellent tunes, as they always do. 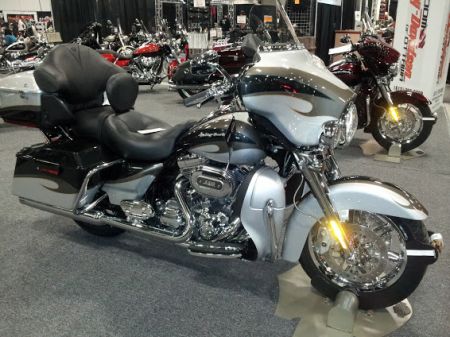 Local motorcycle dealers Freedom Harley Davidson of Ottawa andPowersports Canada had huge displays of a variety of motorcycle models that attracted intense interest. Everything from gorgeous CVO models to the head-turning hard candy colours on the new Sportsters filled the Freedom Harley booth. The new Repsol CBR1000 had a perfectly understandable place of honour in the Powersports booth, while crowds of fans converged on the row of beautiful Ducatis. Powersports also had an extensive line of Yamaha’s newest and most incredible bikes, of course.
Rockland Wheels drew a lot of interest to the latest and greatest creative and ingenius developments by Kawasaki, bikes such as the new EX300 and a fantastic white and black Vulcan 900, plus much more.

Motor Sports World rocked the show with incredible deals on all sorts of things including helmets. The level of active participation in the show that these guys exhibited was a true testament to the powerful community spirit of this dealership. 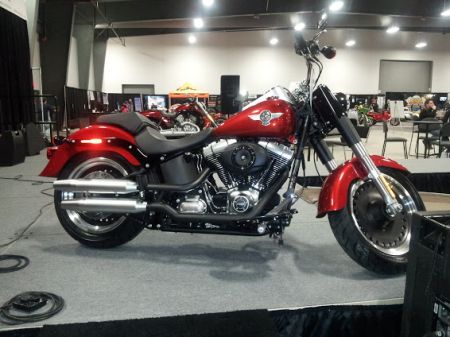 stepped up in a big way as well, sponsoring the entertainment and raffling off an intensely cool CBR 250 (awesome lighting included). The entertainment, by the way, included the Juno award winning band Monkeyjunk, the master guitarist Chris Witoski (who also played the party at Fatboys Southern Smokehouse on Saturday night), and the spellbinding blues of the amazing Al Tambay. There was nothing even remotely resembling a weak link in the entertainment lineup.
The pulled pork sandwiches, chili, ribs, and cornbread served up by Fatboys Smokehouse were exceptionally good (and priced amazingly low!).

And if you like smoked meat sandwiches (and who doesn’t?), a visit to Big Rig Kitchen and Brewery for lunch would be exactly what the doctor ordered, a deal sealed with one of the superb craft beers that they had on tap as well.

The custom bikes that competed for serious cash prizes and trophies that dwarfed the presentation table were worth the price of admission in and of themselves. The builders, including Rat Shop Custom Bikes, are truly artists. Very impressive lineup. 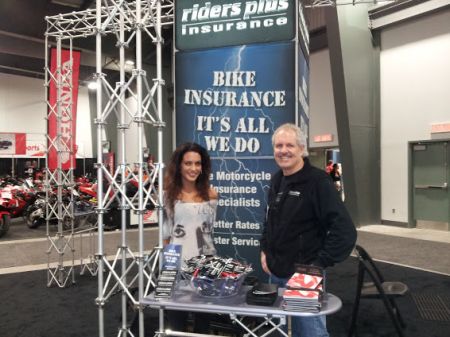 This show provided a perfect opportunity for attendees who were considering getting licenced to talk to (and sign up for) one of the local rider training courses from the pros who had booths at the show. It was great to see Algonquin College, Rider Training Institute, and Ottawa Safety Council all attending, answering questions and pumping up the enthusiasm of the eager new riders.
So that’s the tip of the iceberg, just a few of the highlights of a motorcycle show that continues to expand and offer more and more fantastic things for Ottawa’s motorcycle enthusiasts. We’ll see you there in 2014!

WASAGA BEACH MOTORCYCLE RALLY
Posted in: Events
We specialize in motorcycle insurance
Get your free quote in under 3 min now
get online quote now

Bundle & Save! Get a quick quote to see how much you could be saving by switching your home, auto and motorcycle insurance to Riders Plus.
Get a Quote