Get ready for an extended cold snap! Stock your bookshelves with stories from authors who will ignite your wanderlust. By the time you’ve read these books, it will be time to get your motorcycle out and make your own memories.

1. Motorcycle Messengers: Tales from the Road by Writers who Ride, Edited by Jeremy Kroeker.

This collection of stories by writers who ride—all over the world— is a perfect introduction to the genre of adventure riding. It’s also a good sampling to discover writers you may not know. Stories from writers like Neil Peart, Carla King, and Paddy Tyson are at times terrifying, hilarious, and poignant. They’re always engaging. Get comfortable in front of the fireplace and meet your new favorite author—or destination. Jeremy is also the author of Motorcycle Therapy: A Canadian Adventure in Central America, and Through Dust and Darkness: A Motorcycle Journey of Fear and Faith in the Middle East.

At age 33, Rene cashed in most of his stuff to finance a three-year around-the-world motorcycle trip. Running out of money stopped him only long enough to earn what he needed to continue, and extended his trip. Through candid narrative and heart-capturing photographs, his travelogue introduces you to the places and people most of us only dream of meeting.

3. Zen and Now: On the Trail of Robert Pirsig and the Art of Motorcycle Maintenance, by Mark Richardson.

Twenty-five years after the journey Robert Pirsig and his son Chris took from Minneapolis to San Francisco, Mark pays tribute to Pirsig and traces his route. He looks up the people described in the book, talks with others along the way, and muses on Pirsig’s and his own personal reflections. In an account that is both travelogue and meditation, he confirms that the process of getting there is more important than the destination.

4. Lone Rider: The First British Woman to Ride Around the World, by Elspeth Beard.

Thirty-six years ago, a 23-year-old Elspeth chucked away her architectural studies and took off on her 1984 BMW R60/6 for a solo 35,000-mile trip. It was an unusual move for a single woman, especially in the days before internet, cell phones, and SPOT trackers. More than two years on the road, she saw civil uprisings, survived life-threatening illnesses, and fell in love. Twice. She returned to London, her life forever changed for the better. Published last year, Lone Rider tells her extraordinary story.

5. Revolutionary Ride: On the Road in Search of the Real Iran, by Lois Pryce.

Against official warnings and the advice of family and friends, Lois set off in 2011 on a 3,000-mile solo trip across Iran to understand its heart. She found a country filled with people of warmth, hospitality, and humour. Told with typical candor and wit, it will have you mesmerized, laughing, and shaking your head in amazement. Lois is also the author of Lois on the Loose, and Red Tape and White Knuckles. 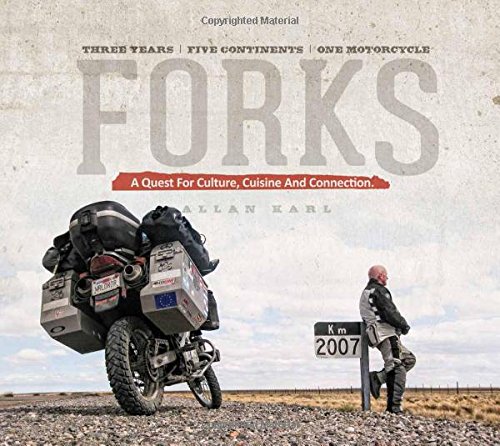 In a clever play on words, Alan uses his connection with cuisine to show how to navigate the inevitable forks in life’s roads. Divorced and unemployed at midlife, he sold his possessions and traveled for three years through 35 countries. Food became a way to connect with other cultures and ultimately himself. FORKS compiles travel tales garnished with 700 mouth-watering photographs and 40 signature recipes.

7. Jupiter’s Travels: Four Years Around the World on a Triumph, by Ted Simon.

An icon in the adventure motorcycle travel community, Ted rode around the world for the first time beginning in 1973 at age 42. During his travels he “lived with peasants and presidents, in prisons and palaces, through wars and revolutions.” Jupiter’s Travels captures his exploits and impressions. Adamant about how travel opens one’s eyes, he established The Ted Simon Foundation, “encouraging adventurers to go the extra mile and be reporters of truth in the world.” Now in his mid-eighties, he’s still riding internationally.

This book found me in 2016 when I was invited to join the Sisters Centennial Motorcycle Ride, celebrating 100 years since Augusta and Adelaide van Buren became the first women to each ride her own motorcycle across the United States. The network of roads we enjoy today were patchy at best. Gas stations were few and far between. Flat tires, broken chains, and mechanical breakdowns were regular occurrences. Gear was heavy and cumbersome, certainly not waterproof. This historic account looks at the accomplishments of pioneer female motorcyclists, including the Van Buren sisters when lives and times were very different than today.

9. Tortillas to Totems: Motorcycling Mexico, the USA, and Canada. Sidetracked by the Unexpected, by Sam Manicom. 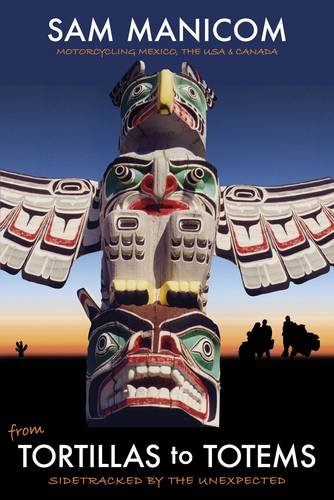 Sam has published a series of travel adventure books documenting his travels around the world. His writing brings you along across dramatic landscapes and through twists and turns of all kinds. Other books in the series cover Africa, Asia, North and South America.

Every New Year’s Day I look forward to hanging a calendar and opening January. Each month features a spectacular photo, selected from hundreds of submissions by adventurers who roam the world. Printed on high-quality stock, it’s bound to get you dreaming.

Now settle into your favorite chair, put your feet up, and get comfortable with a good book.

What to Do Immediately Following a Motorcycle Accident
Posted in: Insurance Tips for Motorcycles
We specialize in motorcycle insurance
Get your free quote in under 3 min now
get online quote now